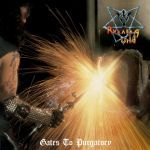 RUNNING WILD is the band that was inevitable for any Heavy Metal fan who grew up in the 1980s in (West) Germany. Sooner or later, everybody into the heaviest music on earth listened to the band from Hamburg, mostly sooner. Rock’n’Rolf and his changing allies were the gateway to Metal for a generation of young addicts. Of course, I also can’t deny being a fan of RUNNING WILD back in the days of yore. In my case, it was in late 1984 or early 1985 when a friend brought along the first album “Gates Of Purgatory”. Being the anti-religious, always provoking teenager I was back then, the (pseudo) Satanic songs of RUNNING WILD were the grist of the mill of mine. Musically, the band appealed to me as well. Classic Heavy Metal was the foundation the songs on the album were built upon: a lot of JUDAS PRIEST, some influences of BLACK SABBATH and IRON MAIDEN, a little ACCEPT, NWOBHM in general and a hellish shot of VENOM in special. Back then, these were the prophets of Heavy Metal heaven for me. Thus, “Gates Of Purgatory” soon became a long runner in my tape deck. Yes, we did a lot of home taping in the 1980s, since all of my Metal friends like me were poor schoolboys of about 14 or 15 years then! In addition, the rather naïve and simple lyrics appealed to me, since they promoted ideas of Satanism as an alternative to the narrow-minded establishment. Listen to the lyrics of ‘Victim Of States Power’ or ‘Prisoner Of Our Time’ and you might understand what I mean, even though the times are different now, of course. Listening to “Gates To Purgatory” later still brought back that old feeling and the memories, but still convinced musically. Especially the rather doomy, BLACK SABBATH influenced songs ‘Black Demon’ and ‘Preacher’ are still great stuff and, in retrospect, are definitely a reason for my affection towards Doom Metal. But also the faster songs, like ‘Victim Of States Power’, ‘Diabolic Force’, ‘Soldiers Of Hell’ or the high speed smasher ‘Adrian S.O.S.’ are still a great joy for any lover of 1980s Metal. With ‘Genghis Khan’, we find a nice tribute to MAIDEN as well, until the final anthem ‘Prisoner Of Our Time’ closes the album worthy. This song is a rather simple song in PRIEST style with a huge sing-along chorus that burns its mark into any ear. So, “Gates To Purgatory” might be 33 years old now, but still this album is not just German Heavy Metal history, but a fine Metal album that you won’t find any better nowadays. And it is even available again for anybody to buy, thanks to the current re-release mania of the revived Noise label. Like most of the new releases of the classic Noise albums, the whole nine RUNNING WILD albums are carefully remastered and sound both fine and authentic. And the CD version of “Gates To Purgatory” has nothing less than eight bonus tracks. In my opinion, the vinyl fans are pranked here, since the the LP version contains only the classic album. But returning to the bonus material of this re-release, I can only state that it is very exquisite, since it covers any official release of RUNNING WILD in the times when “Gates To Purgatory” was put out. There are the two songs the band recorded for the “Rock From Hell – German Metal Attack" compilation in 1983. Both ‘Chains & Leather’ (on the follow-up record) and ‘Adrian’ (on “Gates…”, of course) were later featured in new and improved versions. The original version of ‘Chains & Leather’ misses the hymnic character of the album version completely and sounds like the demo recording it originally was. ‘Adrian’ (not the son of Satan here) is just a little rougher and not as fast and powerful. This stuff might be interesting for completists, but the really interesting shit are the next four songs. Alongside “Gates Of Purgatory”, Noise also released a 12” single of the albums opener ‘Victim Of States Power’ with two unreleased songs on the B-side. These two songs were featured on both North American pressings of the album (Combat and Viper) as well, but in Germany, they became the rarest RUNNING WILD songs for a few years, until they were issued on the CD editions of “Gates To Purgatory”. Both songs would have fitted the original album, but in fact, they weren’t on it and, seen from the 2017 point of view, maybe with reason. Of course ‘Walpurgis Night (The Sign Of Women’s Fight)’ and ‘Satan’ still are fine classic Metal songs, but can’t completely keep up with those classic hits and anthems of the album. Two more really rare songs are the ones from the now legendary "Death Metal" compilation Noise unleashed 1984. On ‘Iron Heads’ and especially the mid paced ‘Bones To Ashes’, RUNNING WILD showed their real qualities for the first time and were the only other band on this record who took a stand alongside the mighty HELLHAMMER. The last two bonus tracks are, in my opinion, as useful as a hole in the head. In 1991, RUNNING WILD thought it would be a good idea to re-record some songs off the first three albums with the then recent line-up and release them as an album called “The First Years Of Piracy”. Well, the version of ‘Soldiers Of Hell’ is at least passable, but the band anthem ‘Prisoner Of Our Time’ completely sucks in the 1991 version, since it looses all the (naïve) charm of the original and sounds like any old RUNNING WILD song from that era. Anyway, asides from these two redundant songs, the extras of “Gates To Purgatory” should please any fan of old RUNNING WILD and make a lot of burned CDs stuff for the trash can. For more info, visit the band: www.running-wild.net, www.facebook.com/runningwildmusic, or the label: www.noiserecords.net