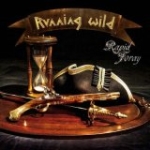 One of the longest lasting Metal bands in Germany for sure are RUNNING WILD! It’s 40 years now that Rock’n’Rolf Kasparek and his (always) changing allies started under the moniker GRANITE HEART, and the legendary first album “Gates To Purgatory” has already 32 years on its back. During their long career, they often received sneer and mockery, but also popularity and acclaim. The latter from their loyal armies of fans, the first from those who didn’t walk the way of the band after their image change. As far as I am concerned, I still love the first two RUNNING WILD albums. Back in those days, it was RUNNING WILD who were, alongside GRAVE DIGGER, a breath of fresh air in the Metal scene: bands from Germany who set their pace to catch up with ACCEPT. I personally liked RUNNING WILD a little better for their naïve occult image and anthems like ‘Prisoner Of Our Time’ or ‘Chains And Leather’ (from “Branded And Exiled”, 1985). After two fine albums, both bands changed their ways. RUNNING WILD chose piracy and the times of the freebooters as their lyrical and optical connection, and that was silly to me, even more silly than their “Under Jolly Roger” album. Time heals, I made my peace with that album and listened to the albums following as well. Yet I somehow had the feeling that they released the same album with a different name each year again. In other words: RUNNING WILD became a synonym for solid quality. If you bought a RUNNING WILD album, you knew what to expect and you got exactly that. But after the release of the album “The Rivalry” in 1998, the band became more and more a solo project of Rock’n’Rolf, with hired musicians and even a drum machine named Angelo Sasso. Since then, the albums of RUNNING WILD got worse and worse, the two years on hiatus didn’t make it better for the band, for the comeback releases “Shadowmaker” and “Resilient” were bloodless, had a thin sound and showed a band that was not even a shadow of their former self. So, it was all bad omens for the new RUNNING WILD album “Rapid Foray”. But to my great surprise, the omen was wrong! The sound still isn’t exactly brilliant, the drums sound too sterile (are those real?) and guitars like a lawnmower. But the songs are the best Rock’n’Rolf composed since “The Rivalry”. The opener ‘Black Skies, Red Flag’ already is a nice one, yet still a little cautious. But with the powerful ‘Warmongers’, it seems that RUNNING WILD re-discovered the spirit of their early days. After the too simple stomper ‘Stick To Your Guns’, the title track ‘Rapid Foray’ picks up the quality again. Those are the classic and classy guitar harmonies the band is well known for. With ‘By The Blood In Your Heart’ RUNNING WILD even recorded a singalong anthem in the vein of their glory days. The naïve charm of the song was spiced with Celtic folk inspired melodies and even some bagpipes. Somehow they got me with that one… With the unimportant instrumental ‘The Depth Of The Sea (Nautilus)’, the level starts to flatten a little bit, ‘Black Bart’ sounds (too) well known, yet pretty nice, and ‘Hellectrified’ is too unimpressive. The Hardrocker ‘Blood Moon Rising’ is a fine wake up call, ‘Into The West’ is as RUNNING WILD as possible. “Rapid Foray” ends with the ambitious setting of the story of the ‘Last Of The Mohicans’ in an epic way. And in a good one as well, despite the length of eleven minutes, for this song is vivid and thrilling enough. All in all, finally the return of RUNNING WILD saw a worthy new album. Visit: www.facebook.com/runningwildmusic, www.running-wild.net or www.spv.de