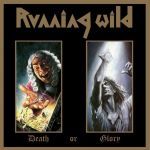 Noise Records are on a re-release frenzy of their good old Metal bands, delivering freshly pressed releases, with nice bonus material for the masses. This time around we have reached the reich of Rock’n’Rolf Kasparek and the godly RUNNING WILD. Who is into Epic German Heavy Metal, without worshipping these guys? I don’t think there are any, damn the band has released some insanely great songs and albums during the 38 years they’ve been around – just as long as me, damn! "Death Or Glory" is by far my favorite RUNNING WILD album, so I guess it is quite lucky, this one was appointed to me, so we can keep the tone positive. This album has it all, the trademark RUNNING WILD epic sing a long songs, choruses that grip you and makes you, unaware, sing out loud together with the band. The gripping guitar riffing with the one superb hook after the other. "Death Or Glory" is a tour de force of classic Heavy Metal guitar riffs, if you can listen to three songs on this album, without being gripped by either main riff, melody or chorus, you ain’t right. This is the album where all the RUNNING WILD elements really find each other and the knot gets tied together, the flow of the album, the quality of the songwriting and music, the delivery and the immense enthusiasm of the band, shines from the studio out through the speakers. Even though the band managed to put out four albums in four years, this, their pinnacle and fifth album, sounds the most worked through and inspired, they must have had a kick ass time in the studio, and that shines through and inspires, this is a damn fine piece of a well crafted Heavy Metal record. As bonus to this splendid album we get the ’90 EP "Wild Animal" with the Epic ‘Tear Down The Walls’ among the four tracks, a nice little gem and then two 2017 remasters of ‘Riding The Storm’ and ‘Bad To The Bone’ from the album, which I really can’t see we need, though that might just be me. That aside, the legacy of RUNNING WILD lives on, not that Kasparek ever has stopped believing in the band’s legacy, as he keeps on spewing forth rehashes of the greater times, as late as last year, with the album "Rapid Foray". Not a bad album as such, though it is RUNNING WILD playing RUNNING WILD, though they just did it way better 20+ years ago, and with much more dynamics back then. "Death or Glory" is from 1989, and sounds powerful and dynamic, it is still fresh and stuffed with energy and conviction. I never grow old of such, and when I do I put on ‘Battle Of Waterloo’, bagpipes do suit the pirates, and if that isn’t sufficient, the instrumental ‘Highland Glory (The Eternal Fight)’ will do the trick. Death or glory? Ride into the storm right here: www.running-wild.net, www.facebook.com/runningwildmusic, www.noiserecords.net