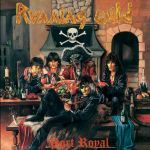 Hamburg, Germany’s RUNNING WILD have reissued multiple classic albums with bonus tracks for those of you who need to discover them for the first time, or rediscover them with extra material. Taking their name from a JUDAS PRIEST song of the same name in 1979, RUNNING WILD have blessed us with four decades of Power Metal. "Port Royal" (1988) was their fourth album, featuring a cover depicting the band members as Heavy Metal pirates at a table of booze and candles. A little odd, but sort of perfect to describe their style. The intro sets the stage with beer-guzzling hackles from pirates in Port Royal, which leads into track two of the same name. The classic anthem with the old school sound we clamor for when the mood hits us just right, is a grimy guitar riff with loud drums, prominent bassline and vocals dominant in those days with melody and range. The chanting of ‘Raging Fire’ is seminal 80s style with something to sing along to as you pump your fist in the air. ‘Into The Arena’ is an IRON MAIDEN-esque, fast-paced, galloping abundance of Metal glory. The wind howls on ‘Uaschitschun’ before excellent guitar playing thunders into our ears, with a nice solo to boot. ‘Final Gates’ is a melodic instrumental fitting in nicely with layers of thumping bass and gentle, steady guitars. ‘Conquistadores’ is a battle-driven pirate extravaganza, changing things up a bit. But I would imagine this as a crowd-pleaser to a live audience. Track nine, ‘Warchild’, sounds just as it’s named… a barreling, marauding beast of a song. ‘Mutiny’, buried near the end, is a mighty delivery of a track, an anthem signaling us to "Stand up and fight!" The over eight-minute ‘Calico Jack’ wraps the album up nicely before the bonus tracks set in (the 1992 version of ‘Uaschitschun’, and different versions of ‘Port Royal’ and ‘Conquistadores’). The reissue is a nice tribute to a band that lasts to this day, a sign of determination and a desire to keep bringing us music to headbang to. Here’s to another four decades. I raise my chalice high in the air. For all additional information, check out www.running-wild.net, www.facebook.com/runningwildmusic, www.noiserecords.net