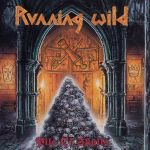 "Pile Of Skulls" is the 7th album in the history of this German Metal band, not counting the compilation “The First Years Of Piracy” which were re-recordings of early songs with the line-up of this album. I will not deny that “Gates To Purgatory” marked my youth for their incredible way of being, at least for me, a better version of VENOM… well, to me at least it sounded that way. 8 years after that incredible debut, I completely lost track of this band. Why? Well, I was young and wild and as they went far from the pentagram and nearer to the sea, I was “more pentagrams!” So… well, it happens that some 15 years ago I was listening to the albums I have never heard from RUNNING WILD and with the re-release of their catalog it was time to hear it once again. Yes, Rock’n’Rolf has changed in his vocal style proving he can sing, and quite good if you ask me. Also the music is still very heavy, yet a lot more melodic than their earlier works. The perfect definition for their music back in the 90s was Speed / Power Metal. They do have a very personal form of doing their music, as their foundations are in traditional Heavy Metal, and the beginnings of Speed / Thrash Metal. Of course the line-up changes have affected the way the music is created, composed and performed. In fact up to this day I am still asking myself why the band was not bigger than what they are. They had that pirate thing image and good music to go with it. I can imagine someone in the 90s going on Sunset Boulevard playing this on full volume and it will make a lot of sense. Their brand of Metal that sounds like MOTÖRHEAD meets W.A.S.P. is definitely made to enjoy. Yes, I think that even as good as the songs are, and some just stuck in your head like ‘Fistful Of Dynamite’, something was not enough for them to make it bigger. With this album the band has a pretty close approach to Hardrock in quite a few songs, of course of the heaviest type, yet it seems that it didn’t gather them many fans of that area, and to be honest I prefer the band when they are more Metal and less Rock’n’Roll, for example ‘Roaring Thunder’ that although it could be in any 90s blockbuster movie soundtrack, it kinda drifted away from the music drunken sailors were after. Yes, RUNNING WILD shines when they are doing Speed / Power Metal. I understand why they tried to make fans in other areas, but it is always risky. Anyway, as a whole, the album is quite enjoyable. This re-edition has a bonus disc, with some alternate versions, basically some different things here and there and some re-recordings of some early songs like ‘Uaschitschum’ and some re-recordings of this album but done in 2003. If you are a fan of the band or the style, this is without a doubt a good chance to grab "Pile Of Skulls" again. Good Metal must keep in print. More beer sailor! www.running-wild.net, www.facebook.com/runningwildmusic, www.noiserecords.net