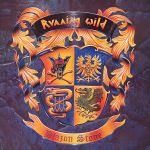 This is the sixth album of RUNNING WILD, released back in 1991, and pretty much still in the same style they did for a while after their debut, and that is magnificent Speed Metal with many Power Metal touches. Yes, they do not mention “Satan!” anymore but they took the Pirate thing seriously, and for me this is the best vocal delivery of the mighty Rock’n’Rolf. The band here plays in a way as if IRON MAIDEN, HELLOWEEN and a more melodic VENOM molted in the seas of Neptune, something similar would be drifting ashore. Nowadays Power Metal bands take quite many ideas from RUNNING WILD. For example WHITE SKULL from Italy (one of the few Power Metal bands I do respect) clearly takes influences from this mighty German pirate gang. The fast riffing and the great vocals are what makes this album such a forgotten masterpiece. Being a bit critical nowadays, the production could be a little better, and although the drummer does his job, probably things could be better in that area. And let me tell you about the vocals. Rock’n’Rolf is a vocalist that basically does the job, I mean it is his band, so taking the role of the leader, vocalist and principal composer, ensures some sort of continuity. He has evolved from album to album, and even if I like his raspy voice of the early offerings more, of all the RUNNING WILD vast discography I think that it is here where he does the best job for his clear voice, in the form that it fits the songs and overall aura very good. RUNNING WILD is one of those bands that deserved a far better fate, yet maybe their deal with the demons of the seas just included women and liquor and they were not really thinking on big arenas at the time… But, for a band formed in 1979 and still going on today, it means they have a loyal fan base, that has kept them going on. And thus for those tired of looking for the early releases, this new edition makes up for it. Included are some re-worked versions done in 2003 and a THIN LIZZY cover from an EP if I am not wrong (yes, ‘Genocide’ from 1991’s "Little Big Horn" EP – Frank), which is kinda weird as even if they do not sound like Phil and Co. they do remind me of them in some way… the devil of the sea works in mysterious ways I guess. Yes, a re-edition worth to get. www.running-wild.net, www.facebook.com/runningwildmusic, www.noiserecords.net