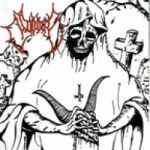 In a seemingly endless line of special SABBAT releases comes this “Live Sabbatical Hamaguri Queen” CD release to help fund SABBAT’s kamikazi attack on North America this September. The songs were recorded over the course of four nights of their 20th anniversary tour in September 2004. The sound quality is fairly consistent throughout the seventeen tracks, and the band’s performance is good… in a VENOM sort of way. But it should be. These guys have been doing it non-stop for two decades and have earned the die hard following they have. The cool photos in the layout are sure to whet the appetite of SABBAT’s American fans eager to see the Metal samurai in action this fall. Watch out Mr. and Mrs. America; the Divine Wind is upon you!