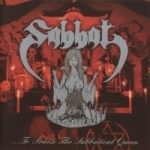 One of the oldest Black thrashing hordes of this planet celebrates its 20th anniversary. The band I am talking about is no other squad than Japanese cult act SABBAT. These warriors unleash a nice piece of blackened thrashing fucking Metal upon mankind in form of their "To Praise The Sabbatical Queen" album. There is no need to introduce them anymore. I guess every serious headbanger is familiar with them and any further comments would be like carrying coals to Newcastle. To be honest I have lost the overall view of all SABBAT’s releases as they are too numerous (not sure but there must be about more than 80 CDs / 7" / LPs / split stuff / demos etc.). This CD here features 15 tracks of re-recorded versions of some of their old classics ‘Black Fire’ or ‘Mion’s Hill’ as well as some other well known and not so well known tunes. Also it includes a cover version of NOKEMONO called ‘Arizigoku’ (NOKEMONO was an old Japanese Hard Rock band which released a nice album "From The Black World" in 1979, their style was similar to very early JUDAS PRIEST stuff if I remember correctly). Furthermore you also get four live tracks which were recorded at Music Farm on their BM Tour ’95. The live tracks have a very good sound quality… I am just wondering where the live atmosphere is (no crowds shouting, announcements etc.)… maybe live in the studio, hehehe (or soundboard recording? – Frank). Anyway all tracks are performed in the typical sabbatical style and are very well executed, so there’s no complain about them. What I like is the fact that SABBAT swing the axe total untrendy and this for ages. They kick a lot of wanna-be bands of this genre into the gutter. The sound quality is good and the packaging and presentation is top notch like we are used to know it from Iron Pegasus. So this piece of Metal art is essential for every die hard SABBAT maniac to complete the collection and to any Black Thrashers out there who enjoy listening to solid and entertaining stuff. Contact the label at www.iron-pegasus.de or the band for detailed information at http://welcome.to/sabbat. There’s also a double gatefold vinyl version available. So get in contact with Costa of Iron Pegasus before it’s too late.