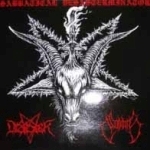 This is a rather typical release for all crazy die hard underground lunatics: a split CD that features live recordings of Japan’s SABBAT and Germany’s DESASTER (both very dedicated acts for many years), with a black and white packaging and (of course) limited to 666 handnumbered copies. Unlike many of these type of releases, this surprisingly does NOT come up with a poor (tapetrading – like) recording quality, but actually offers a surprisingly good sounding one. Of course it still does not come across like a mega professional big budget live album, but that isn’t the purpose of such a limited item anyway. So, what we get here is 6 tracks of each band – DESASTER’s part was recorded in Bladel (NL) on June 13, 2003 when the band was on tour with ZEMIAL, while SABBAT obviously were captured during a show they used to play in their home country on May 4, 2003 at the "Music Farm" (at least they talk in their native tongue the whole time). The live intensity impressively comes across on this release and explains the good reputation of both bands in that department. I will probably never become a SABBAT fan, but it’s still great to hear these guys perform their very furious set nevertheless. And DESASTER…? Well, they are as devastating as ever! I suppose I won’t have to talk about their live qualities anymore as most of you have probably experienced the band "for real" sometime already. So, if you consider yourself a fan of DESASTER and / or SABBAT, or you simply collect obscure underground releases, make sure to get your hands on a copy of this one. It sells for 13,- US $ / 12,- € (ppd.) from: Witchhammer Production, c/o Jerasak C., 6/404 Soi. Phahonyothin 48, Anusaowaree, Bangkhen, BKK City 10220, Thailand, email: witchhammer666@hotmail.com