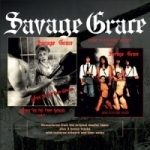 SAVAGE GRACE
After The Fall From Grace / Ride Into The Sun
(Limb Music)
68:25min

On SAVAGE GRACE’s second album "After The Fall From Grace" guitarist Christian Logue had to take over the vocals himself as former singer Michael John Smith unfortunately was no longer part of the band. But he came up with a surprisingly good result, considering that he was a guitar player in the first place. He might not have had the same power in his voice as Smith and went for a slightly more melodic direction, but it definitely fitted the band’s new material very well. SAVAGE GRACE still had a lot of great twin guitar work going on at the time, but found a quite unique style on their own by now, leaving behind the MAIDEN similarities almost completely now. I still remember how much they impressed me live when I saw them on the "US Speed & Power Tour ’86" overhere with HEIR APPARENT! That was definitely a night to remember! HEIR APPARENT’s bass player Derek Peace even joined SAVAGE GRACE afterwards for their "Ride Into The Night" EP, which you get on this re-release as well. Even though the material was still pretty good and unmistakable SAVAGE GRACE, you could already hear that the band was starting to lack in quality a little bit. Their cover of DEEP PURPLE’s ‘Burn’ certainly wasn’t bad, but in 1994 RIOT definitely did a way better job on their "Nightbreaker" album! I wouldn’t necessarily say that I had missed out on something, when it comes to the four additional bonus tracks on this re-release, which were all unknown to me before. SAVAGE GRACE musically just wasn’t the same band anymore (apart from Christian Logue, the line-up had completely been changed once again) and obviously headed for a more bluesy Hardrock direction. ‘Mainline Lover’ (a studio recording from 1993, previously only unreleased on the "American Metal – Heavy’n’Dirty" compilation) for one reason or another even made me think of THE CULT’s "Sonic Temple" album, while the even blusier ‘Bare Bottom Blues’ and ‘Such A Dirty Mind’ were both recorded live in Las Vegas on May 05, 1992… When it comes to the remastering, the difference between this and the original version is not as big as on "Master Of Disguise", but that might be due to the fact that "After The Fall From Grace" had a better production on offer already back when it originally came out. The booklet is equally impressive as the one of the "Master Of Disguise" re-release though, only the repros of the album covers turned out a little too dark in both cases (probably because no originals were available anymore?!)… Musically this ain’t as godly as "Master Of Disguise", yet still highly recommended due to several great tunes such as ‘We Came, We Saw, We Conquered’, ‘After The Fall From Grace’, ‘Trial By Fire’, ‘Destination Unknown’ or ‘Tales Of Mystery’! More info: www.myspace.com/officialsavagegrace, www.limb-music.com, www.myspace.com/limbmusic