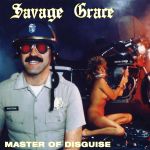 So this will be the third review on this site for SAVAGE GRACE’s debut album “Master Of Disguise” (originally released in 1985). To sum up the music shortly – it is classic Power / Speed Metal from the times when there was actually power in that style of Metal. The execution is perfect and everything you would expect from the masters of their trade – great harmonies, twin guitar work, neckbreaking drums, catchy songwriting and wide range vocals with lethal speed and energy bursting out from the speakers. I will admit that I’ve missed it when it was released and re-released before, so it was a great discovery and the remastered / remixed version that you get here definitely made a huge impact, because compared to the original it sounds way better with full on audio dynamics and a much more balanced mix. Now here’s what you get with this 2 CD package: the first one contains the remixed and remastered album, “The Dominatresss” EP, a 3 song 1982 demo and the ‘No One Left To Blame’ track from a 1984 demo. My guess, this is the same as the version released on Limb Music in 2010 and reviewed by Frank in these very pages. At least the track listing is the same, I’m not sure whether that version was also remixed or only remastered. And the second CD contains original recordings of the album and EP without demos. Now for me personally it is a waste of plastic, because the old sound and mix is horrible compared to the remastered version, but I’m sure it might be the other way round for those who got into SAVAGE GRACE back in the 1980s when the original recordings came out and who prefer the originals. In any case, now you can have both versions in one package, so this will bring joy to completists, but I’ll never listen to the old versions after hearing the powerful sounding remastered songs. By the way, the band is reformed and still going, so maybe there will be some new material. Meanwhile, grab this one cool re-release and start banging your head like it’s 1985! More info about the band at www.savagegracemetal.com. For the re-release please visit www.facebook.com/hammerheartrecords 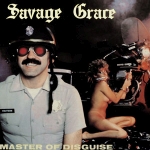 The 80s were probably the best decade for extreme Metal. Many bands developed this music genre in new and unexpected forms and only a few of them are regarded as cult acts. On the other hand, there were acts whose impact was seen as modest at the time and is just in the current times when we can assess their true contribution to making a fair statement. And in my opinion, SAVAGE GRACE is probably one of the most underrated US Power Metal acts ever! Formed back in 1981 in Los Angeles, California, this classic band released the “The Dominatress” EP under Metal Blade Records. Two years later “Master Of Disguise” was launched under Important Record Distributors, Inc. and Black Dragon Records and now is available once again on CD thanks to Hooked On Metal Records (no thanks to Limb Music and its awful 2010 “remastered” version of this album). What you will find here is an unstoppable force full of energy and great ideas when Metal was about seeking your place in the business. Yes, the cover art is laughable and the general production here is far from great, but what really counts is the stuff quality. All are killer songs but my favourites are ‘Bound To Be free’, ‘Fear My way’, ‘Master Of disguise’ (what a great drum intro) and ‘Betrayer’. After “Master Of Disguise”, SAVAGE GRACE released “After The Fall From Grace” and toured Europe with their countrymates HEIR APPARENT. One more EP and they disappeared from the map. Now they are active once again. As you should know, SAVAGE GRACE is still very influential even in 2020, after almost 40 years of its inception. One last thing: there is nothing wrong in making reissues after reissues of the classic BLASPHEMY or CELTIC FROST back catalogue on many different formats, but come on, acts like SAVAGE GRACE deserves a nice vinyl reissue as well (both albums will be out on vinyl again via No Remorse Records in April 2021 – Frank). If you’re into OMEN, AGENT STEEL, HELSTAR, ABATTOIR, ATTACKER or NASTY SAVAGE, this won’t disappoint you (unfortunately there’s a tiny little interruption on this new edition between the instrumental opener ‘Lion’s Roar’ and ‘Bound To Be Free’, that originally had been melted together, which is a pity, but then again, the booklet comes up with liner notes, lyrics and a couple of old pictures, so that makes up for that – Frank). Official SAVAGE GRACE site here www.savagegracemetal.com. Label contact here www.facebook.com/hooked-on-metal-records-102213271304559