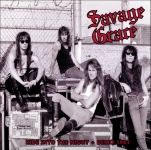 With the re-release of the 1987 EP “Ride Into The Night”, Hooked On Metal Records finished their mission to make all the old recordings from legendary Speed Metal masters SAVAGE GRACE officially available again. The original recordings were only available on a picture disc 12” record back in the days and marked the (up to now) final release in the history of the band. Long time bass player and original member Brian “Beast” East left the band after the very fine “After The Fall From Grace” album from 1986 and was replaced by former HEIR APPARENT bassist Derek Peace. But this was not the reason why “Ride Into The Night” always was the flaw in the discography of SAVAGE GRACE to me. The first two songs ‘Ride Into The Night’ and ‘We March On’ just didn’t have the quality of the songs of the album released the year before, as they already peered hard at some commercial success. So, it was sacrificing quality for money a little bit, even though success never happened. With the mid tempo epic ‘The Healing Hand’, at least one of the four songs met the high quality SAVAGE GRACE is known for. The final song of the EP was a nice, but not really ground breaking cover of the classic DEEP PURPLE tune ‘Burn’. Just like the re-release of “The Dominatress”, this re-release features quite rare demo recordings. In this case, it’s four songs from a demo from 1983 that wasn’t officially released back in the day and saw the light of day for the first time in 2010 as a 7” EP under the moniker “The Lost Grace” via Nuclear War Now! in co-operation with Snakepit magazine. The line-up of this demo was the same as the one on “The Dominatress”, which means it featured John Birk on vocals and Kenny Powell of OMEN fame on guitar. And these rare recordings alone are worth getting this CD, especially for historical reasons. We find three great songs from the first SAVAGE GRACE album “Master Of Disguise” in early, slightly slower versions. ‘Into The Fire’, ‘No One Left To Blame’ and ‘Betrayer’ are fantastic old school Speed Metal masterpieces and the raw versions here, sung by a different singer, are really charming to listen to. Yet the most interesting song here is an early version of ‘Die By The Blade’ that Kenny Powell later recorded with his new band OMEN for the milestone “Battle Cry” in 1984. For a fanatic fan of early OMEN, this version is pretty worthwhile, even though the rather thin voice of John Birk can’t stand any comparison with the strong voice of J.D. Kimball. Nevertheless the four demo songs alone are worth getting the new edition of “Ride Into The Night”. And it’s great that Hooked On Metal didn’t use the awful original artwork, but chose a different band photo from that era of SAVAGE GRACE. For more, visit www.savagegracemetal.com or www.facebook.com/hooked-on-metal-records-102213271304559