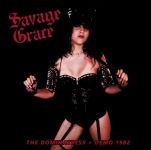 The rather new Swedish label Hooked On Metal Records is one with a mission: making classic Metal records from the 1980s available again. And right now this means putting out all the albums from US Speed Metal legend SAVAGE GRACE anew officially. Two months ago, the two full length albums “Master Of Disguise” and “After The Fall From Grace” were the prelude, now the two EPs settle the case. Of course this also includes the legendary, yet always a little overrated “The Dominatress” mini album that Metal Blade released in 1983. As the EP hasn’t been licensed to a European record company back in the days, this mini album was hard to find for a long time and has always been a kind of “holy grail” for European SAVAGE GRACE fans. But, to be honest, it never had the class and the speed of the two albums and showed a good band heading for higher aims. The five songs on “The Dominatress” are still more rooted in classic Metal and are not as up paced as the songs from the albums. But songs like ‘Fight For Your Life’, ‘Live To Burn’ or the title track are, of course, still very fine examples of early US Metal with style. The joy of listening is only spoiled by a mastering error in the second song ‘Curse The Night’ and the somewhat thin voice of John Birk. Unlike the re-releases of the two albums who were re-issued in their original form, Hooked On Metal added some extra songs to the EPs. “The Dominatress” got spiced up with the three songs from the 1982 SAVAGE GRACE demo. And these extra songs are a real inducement to buy this CD. The rough ‘Genghis Khan’ is a song that can only be found on this demo and it would have fitted perfectly on “The Dominatress”. ‘Sceptres Of Deceit’ was already released on the second part of the legendary “Metal Massacre” compilation series and was definitely a real highlight on that compilation, as it really showed the potential of SAVAGE GRACE to become a great Speed Metal band. The third song of the demo, ‘Curse The Night’ is the only one who found its way on the “The Dominatress”. But the demo version is definitely the one I choose over the version on the EP, due to the much better vocal performance of Dwight Cliff, who unfortunately left SAVAGE GRACE after this demo. If “The Dominatress” isn’t enough reason to get this CD, the bonus material definitely is! Visit www.savagegracemetal.com or www.facebook.com/hooked-on-metal-records-102213271304559