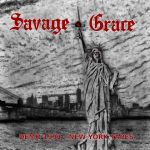 When I reviewed the two re-releases of the EPs from SAVAGE GRACE three months ago, I was damn sure that the mission of Hooked On Metal Records was complete. All the four vinyl releases that the almost forgotten Speed Metal veterans did in the 1980s are available again, the two demos from their early days were included as well. Mission complete? I was wrong! Does anybody remember those re-releases Limb Music did of the two albums in 2010? Their edition of “After The Fall From Grace” also included some later songs SAVAGE GRACE did, ‘Mainline Lover’ appeared on a compilation and sounded completely different from what the name stood for. Also the two live tracks from 1992 on that compilation went that same direction. These could have been filed under Hard Rock with a touch of Blues Rock. Usually I really dig this kind of music, when it has good and catchy songs. But even if I ignored that these songs were recorded by the Speed Metal legend SAVAGE GRACE, these songs weren’t good. Not really! The only thing these recordings had in common with the old stuff were the name of the band and Chris Logue on vocals and guitar. And now I had to find out that this line-up recorded a lot more: ten songs in album length were produced, mainly in New York where Mr. Logue resided in the early 1990s. And now all that stuff was put out as the fifth part of the SAVAGE GRACE re-release series under the title: “Demo 1991 – New York Tapes”. Of course ‘Mainline Lover’ is on this CD, serving as the opener, as well as studio versions of the other two already released songs. It’s no surprise that these ten tunes are in the same style. Chris Logue really tried to get his piece of cake during the Hairspray Metal hype, but failed to even get a deal with them. And you can’t blame the Grunge wave alone. It’s also the fact that most of the songs were quite dull and uninspired, sounding like I heard all that a thousand times before. I mean, ‘Mainline Lover’ is one of the “highlights” on this CD, along the rather smart ‘All Tanked Up’. The remaining stuff is overloaded with clichés and sometimes even sounds a little bit silly. And remember, I tried to block out the fact that this stuff is recorded under the moniker SAVAGE GRACE. Even if Mr. Logue would have used a new name, I would have come to the same conclusion. In the very end, here are the usual links: www.savagegracemetal.com, www.facebook.com/hooked-on-metal-records-102213271304559