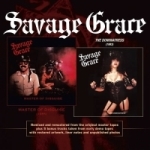 SAVAGE GRACE originally started out as MARQUIS DE SADE waaaaay way back in 1981, changed their name into SAVAGE GRACE shortly after and went through various line-up changes until their break-up in 1992. Before mainman / guitarist Christian Logue took over the vocal duties himself for their 1986 swansong full length “After The Fall From Grace”, they had Dwight Cliff, John Birk and Michael John Smith singing for them. While the latter’s obvious talents can easily be heard on “Master Of Disguise”, Birk just sang on the previously released classic Metal Blade EP “The Dominatress” (which also featured Kenny Powell on guitar, who left the band to form the excellent OMEN afterwards). Cliff’s input unfortunetely is limited to the band’s debut demo exclusively, which is a shame cause to me he was a better vocalist than Birk… Anyway, if you weren’t aware of all those singers, this is a good opportunity to compare their qualities on your own as the re-issue of “Master Of Disguise” also features their EP and demo stuff as well. The entire material also got remastered, and in this case you definitely hear that! While the original version always suffered from a very thin sounding production, the bass is finally way more audible now which increases the quality of the songs even more. The production of the drums still remains a little mystery to me though, but at least they come across totally honest and not triggered or digital sounding like on almost every new release these days. The CD comes in an additional slip-case now and furthermore offers an impressive booklet that features all lyrics, lots of old pictures, a band bio and liner-notes by Christian Logue plus four bonus tracks: ‘Scepters Of Deceit’ (which also ended up on the legendary “Metal Massacre II” compilation from Metal Blade), ‘Curse The Night’ and ‘Genghis Khan’ (in other words, their complete 1982 demo) as well as ‘No One Left To Blame’ (from a 1984 demo). Musically SAVAGE GRACE definitely were at their peak with “Master Of Disguise” and without a doubt one of the finest examples of American Speed Metal! Somehow you could say that their songwriting at the time was somewhere in-between IRON MAIDEN’s Di’Anno era and “The Number Of The Beast”, just played a little bit faster, but never forgetting about great harmonies, excellent twin guitar work and exceptional vocals. Michael John Smith had a pretty unique, clear, but always very powerful voice and he never ended up sounding like one of those typical high pitched Power Metal screamers. Too bad it didn’t work out between him and Logue in the long run. “Master Of Disguise” is without a doubt a must have for any fan of classic 80s Metal and considering that this edition offers way more value for money, make sure to go for it now if you haven’t already! More information is available at: www.myspace.com/officialsavagegrace, www.limb-music.com, www.myspace.com/limbmusic.