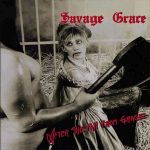 SAVAGE GRACE
After The Fall From Grace
(Hooked On Metal Records)
36:18min

I guess I don’t need to tell you once again how great the 1980s were for Heavy Metal. Asides from the big bands that became commercially successful or well respected influential acts, there were so many other good to great bands who got nearly forgotten over time. Their albums are hard to get and their names are spoken mainly by those who know since that age of dinosaurs. But over the years, a lot of this legendary stuff got re-released. Sometimes you get jam-packed CDs or even double to triple discs. Sometimes you simply get an original album without much extras, like in this case of the second (and final) SAVAGE GRACE full length album “After The Fall From Grace”, originally released in 1986. Like with the re-release of the highly acclaimed 1985 debut album “Master Of Disguise”, a classic of US Speed Metal, some few weeks ago, the rather new label Hooked On Metal Records concentrated on presenting the album in its purest form. On the one hand, you only get not even 40 minutes of music (yes, back in the days of vinyl most albums didn’t run much longer), on the other hand, you get only finest musical quality in its original form. And “After The Fall From Grace” still is finest American Metal of that era. After wearing out (or scaring away) four singers in four years, mastermind and guitar player Chris Logue decided to take over vocal duties himself and did a nice job. And the songs on “After The Fall From Grace” are even a little better than those on the debut, in my opinion. In addition to finest melodic Speed Metal tunes like ‘We Came, We Saw, We Conquered’, ‘Destination Unknown’ or ‘Trial By Fire’, SAVAGE GRACE added more Power Metal styled mid tempo parts and even some epic parts to their sound, just listen to the fantastic title track or the great ‘Flesh And Blood’. And the final highly melodic epic ‘Tales Of Mystery’ even reminds me of the mighty first album of HEIR APPARENT. With all those brilliant songs it’s a real pity that “After The Fall From Grace” was the last full length album from SAVAGE GRACE. There only was the picture disc EP “Ride Into The Night” a year later before the band slowly fell apart in the early 1990s. Chris Logue reanimated his band for some shows around the year 2010 and received an infamous reputation in the meantime, but that’s not our story here. The story is: both SAVAGE GRACE albums are available again, officially and rubber-stamped by Mr. Logue. So, no matter if you missed the albums in your youth or if you are just born late, now there is the chance to catch a piece of US Metal history. For more, visit the band at www.savagegracemetal.com or the label at www.facebook.com/hooked-on-metal-records-102213271304559