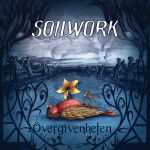 This one helluva catchy album. I’d say one of their best releases since “A Predator’s Portrait.” The guitars are simply amazing and the vocals fluctuate, sometimes screaming, sometimes singing clean. This reminded me a little of Metalcore bands, but they’ve got their own sound to them. Sad about losing their guitarist David Andersson. It’s tragic, as he was only 47. But being his last effort with the band, I thought the riffs were just amazing. Such feel to their album and variety. Between clean vocals, melodic guitar riffs and a solid sound quality in their overall production. What a monument of an album. There were a lot of clean tone segments, but the guitars that were heavy drowned them out. But yeah, those segments of clean work show so much essence to their souls. It’s not a super long release but it’s so quality in their musicianship. I’ve been following SOILWORK since “The Chainheart Machine” came out I believe in 1998. I’ve always admired their music and songwriting capabilities. They were always tops with me. And this album does the band justice wholeheartedly. I liked this whole release and it shows the emotional state of the band. Mainly the songwriters, they were totally innovative and strong. These guys have been making good music since the late ’90s. I always liked their melodic Death Metal genre. Though, nowadays they’re more melodic Death mixed with a little Metalcore. It’s still likeable material, don’t get me wrong, they’re just not as heavy as in the early SOILWORK days. These guys still have a great deal to offer despite losing David last year. He was with the band for about 10 years. A lot of his work was with the final release with this one. He was so talented. And that totally shows on this release. Old SOILWORK is gone, but the new is still going strong with their melodic music and amazing musicianship! www.facebook.com/soilwork, www.facebook.com/nuclearblastrecords