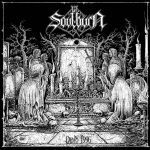 In 1996, after the release of “God Cries” from ASPHYX, Bob Bagchus and Eric Daniels joined forces again and together with Wannes Gubbels from PENTACLE they formed SOULBURN. After the typical 90s intro ‘Enter The Flames Of Soulburn’ the first of two composed tracks ‘Hellish Entrapment’ opens the casket and yes, this is the stuff we expect to hear from the members. Slow old school Death Metal in the vein of ASPHYX but less doomy. Anyway SOULBURN was handled as legit successor to ASPHYX in that time and yes, these compositions really nailed it. The shredding chainsaw guitars of Eric Daniels are first class and combined with the good drumming of Bob Bagchus and the damn cool vocals of Wannes Gubbels (not too far away from Martin van Drunen) made this joint venture pretty enjoyable and delivered, what the fans of ASPHYX were longing for. ‘Behold The Funeral Candle’ continued digging the listeners grave and speeds up after a while to make sure the neck gets broken before the funeral starts. Worth mentioning is the middle part, from which I still get goosebumps after all these years. This material is timeless and even the outro ‘…The Flames Of Soulburn’ is simple but damn good as the guys really knew how to make a proper demo from start to end. Fans of SOULBURN should check their first steps out as they sounded far better back then. Fans of ASHPYX already have at least their first full-length “Feeding On Angels” and can fill up their collection with this rare gem, which was re-released by Vic Records. This stuff is really worth to buy and have. For more SOULBURN info, please check www.facebook.com/official.soulburn, label contact: www.vicrecords.com