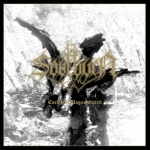 Two years ago, SOULBURN returned after a sixteen-years break to release their second album “The Suffocating Darkness” which had a far blacker painting than their debut release. Live the band accentuated this development and showed that their path is leading more and more into 80s orientated Death / Black Metal. Somewhere between BATHORY, CELTIC FROST and of course ASPHYX, the band sounded matured and the guys found their own identity with really solid and good tracks. The opening track ‘Where Splendid Corpses Are Towering Towards The Sun’ is a really dirty beast which subsists on the unholy vocals of Twan van Geel, the unique drumming of Bob Bagchus and very solid guitar work of Eric Daniels and Remco Kreft, partly rough and evil but also doomy and technical with bows to MORBID ANGEL or their own past in ASPHYX. ‘Howling At The Heart Of Death’ maybe is the best track on the album with a really cool and doomy intro before turning into a crushing ancient Black Metal beast with a really menacing and dark atmosphere. Its follower ‘As Cold As Heavens Slain’ even goes a step more into 90s Black Metal and shows their crude love for extreme and simple Black Metal. If you expect a Death Metal album from the band, you might get disappointed but for those the new ASPHYX album is a really great alternative. But those who start to explore the album open-minded and grant this dark piece some more spins will experience a dark and heavy album with a rotten mixture of ancient Black, Death and Doom Metal with a unique sound, a hellish good production enriched by a well-fitting cover artwork. Surely one of the highlights of this year and worth to buy. For all additional information about the album, the following sites can be checked: www.facebook.com/official.soulburn, www.centurymedia.com