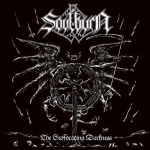 Back in 1998, when SOULBURN released "Feeding On Angels", the blend of old school blackened Death Metal à la early BATHORY, MESSIAH, SLAUGHTER was not really making the buzz as we can witness it today. But it did not prevent the black carcass of ASPHYX to go for music played with soul and efficiency. Indeed, this first album of SOULBURN still remains a pretty timeless piece of quality Metal. So, what’s up with the band 16 years later? As some of you might already know, SOULBURN, vanished and turned back on the wings of Inferno into the almighty ASPHYX again for one album, then came a long hiatus between 2000 and 2007. Since then, the success of this legendary Death Metal band has not stopped to increase. It came to a point where Bob Bagchus left his drumsticks to Stefan Hüskens (DESASTER) in the ranks of ASPHYX. Because of the rather busy activity of the band he could not follow any longer. In the meantime, links between former ASPHYX guitarist Eric Daniels and Bob would strengthen, and parallel to ASPHYX, the guys would start to play music together again and gave birth to GRAND SUPREME BLOOD COURT and TO THE GALLOWS. This last short lived band was in fact very close to what SOULBURN stood for in the past. A blend of 80s Black and Death Metal, totally crawling and filthy. TO THE GALLOWS tranformed then pretty soon into the hideous beast called SOULBURN, and some new morbid tales were to be written. Even though the core of SOULBURN remained, by having Eric (guitar) and Bob (drums) back in business, the line-up would evolve for this new desincarnation of the band. Wannes Gubbels being busy again with PENTACLE, the task to play the bass and spew words of mayhem and disgust was now given to Twan Van Geel (LEGION OF THE DAMNED, BUNKUR, FLESH MADE SIN). And another guitarist was added, in the presence of Remco Kreft, also involved in GRAND SUPREME BLOOD COURT… Now you’re lost, or what ? Yeah that sounds even more incestuous than when it comes to the situation with Swedish bands. But only the music matters. Right ? So, "The Suffocating Darkness" is without surprise totally uncompromising and takes off were the band stopped years ago. The typical guitar sound of Eric Daniels crushes the ears and hammers down the burning souls of sinner that dare to cross his path. His unique and so specific eerie soli keep on comforting our somber side. And the typical heaviness of these Dutch maniacs is to be found there, by using repetitive patterns of solid riffs. The mix between slow and suffocating parts with mid paced blackened riffs makes the trademark of SOULBURN totally recognisable here. As a proof, a song entitled ‘Hymn Of The Forsaken II’ is the follow up to the track with the same title that is to be found on the first album from 1998. All in all, there is no necessity of talking about "evolution" when it comes to SOULBURN. There’s rather a progression, because of a pretty solid sound, and some parts like on the beginning of ‘Claws Of Tribulation’ where the morbid melodies sound damn solid thanks to the twin guitar assault. The major change compared to the first record is to be heard with the vocal style. Whereas Wannes Gubbels has this pretty corrosive way of singing, pretty much rooted in the old Dutch style à la ASPHYX, ACROSTICHON, DELIRIUM, Twan Van Geel comes up with a more early 90s Black Metal way of singing. This is indeed powerful and adds to the black side of SOULBURN, but at the same time, my only complain would be that his vocal style lacks slightly of personality. That’s not a big problem tough, as every single track on this album is as heavy and haunting as it can get for the fanatic of Death and Black Metal the uncopromised way. Plus, there are a couple of videos showing the band’s live performances and these guys are solid and crushing as hell. Now there’s only the wish that the procession of these burning souls does not extinguishes too soon, and stays for good. More official information here: www.facebook.com/official.soulburn, www.centurymedia.com