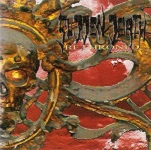 I think every greater town in Germany has their own “local hero” Metal band, that is active for quite a while but has not really rose much attention outside this local area. And for the town of Osnabrück (only real with the rock dots), this band seems to be SUDDEN DEATH. There will be no other explanation for the fact that I haven’t heard of the guys before although they are from a town about 100 kilometres from my home, played Death Metal and were around for a quarter of a century. In their long career, they released two EPs and three full length albums until they split up in 2015. “Rethroned”, the album at hand, is the second of them, released in 2007. And when I listen to the eight songs (plus one intro) of the album, I begin to understand why the name SUDDEN DEATH is not better known. “Rethroned” offers pretty brutal Death Metal that is solid as a rock, mainly kept in mid tempo. A break here and a change of speed there make sure the songs are not too monotonous. The songs themselves are written with heart and mind, maybe too much mind. And that’s the point: despite the musical skills and passion of the band, the songs sound a little bit too calculated to really start a fire. Listening to the two opening songs ‘Until Hell Froze’ or ‘Insert Coin’, for example, always made me think that there’s the final kick missing, even though they aren’t bad. And this feeling continues until the last notes of ‘Germ Under God’. But if you’re likely to dig an underground brutal Death Metal album, you’re welcome to find out more about the band at www.suddendeathmetal.de or www.facebook.com/suddendeathmetal