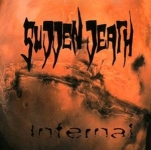 SUDDEN DEATH is a German band that was formed way back in 1990. This is actually the second material they have released and that was in 1998. What we have here is Death Metal, which at times reminds me of early CRYPTOPSY with also some references to CANNIBAL CORPSE and SUFFOCATION although some of the riffs and the overall sound reminds me of a band like MACABRE. In fact the first two songs sound a bit generic even for the time this was recorded, but things start to change for the better with the last tracks of this MCD. Something to notice is the quite good solos, melodic yet aggressive, that go along with the music. Vocal-wise this is more in the low growing style, although a few high pitched screams will surely catch the casual listener. If I had heard this at the time it was released it would not change that much about the impression I have almost 20 years later. It is good yet it needs something more, and makes you want to hear them again. Well, the band was still going until 2015 and they have kept the style of Death Metal and sound. A lot more mature, more precise with a heavy bass, and a sound that reminds me of MORGOTH from the “Odium” era. Check them out. www.suddendeathmetal.de, www.facebook.com/suddendeathmetal