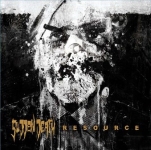 It was the year 2012. Good old fashioned Death Metal slowly regained some popularity and that year saw the refreshing releases of new bands that brought some fresh rotten wind. 2012 was also the year that saw the release of the third album of Osnabrück’s local Death Metal heroes SUDDEN DEATH. “Resource” turned out to be the swan song of the four-piece that split up three years later. In comparison to its predecessor “Rethrone” from 2007, “Resource” added an extra shot of brutality to the sound of SUDDEN DEATH. But even more important, this album also has that extra kick in the teeth a brutal Death Metal band needs. The songwriting appears to be more fluent and uncompromising, thus musical massacres like ‘Erosion’, ‘Bionic’ or ‘Beginning Of Madness’ are a real feast for lovers of the genre. And even though “Resource” is nothing less than a full-scale attack, it doesn’t become boring in the long run. The final songs, especially ‘Fallout’ (a little tribute to Pete Steele?) and the closing ‘Survive’, are the highlights of the album. As long as you like your Death Metal the brutal way, there should not be any reason for you not to check out SUDDEN DEATH. More info at: www.suddendeathmetal.de, www.facebook.com/suddendeathmetal