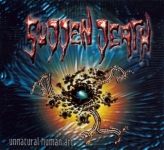 This was my first time ever hearing this band and I must say this was a pretty damn fine release. A nice mix of Thrash Metal with low Death Metal like vocals, but nothing like the cup the mic style of Death Metal vocals though. It took a little bit to get used to his vocals in a Thrash Metal band, but they were fine to these ears. The tunes are wicked fast paced Thrash tunes with none of that new groovy sound of Thrash in the music. This is more pound you into the ground Thrash that had my neck moving for sure. To me what makes a good Thrash band obviously is the riffing in my book and I also prefer some speed in my Thrash and this deliver on both ends of that. Besides the riffs the songs were fast, which works for me, and a cool guitar sound as well. This band also has some more releases out ("Unnatural Human Art" was their debut full length from 2000 – Frank), but I have not yet heard them, but for now this is easily worth picking up if your into Thrash (unfortunately SUDDEN DEATH split-up back in 2015 – Frank). Info: www.suddendeathmetal.de or www.facebook.com/suddendeathmetal