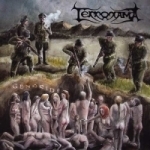 Swedish extreme Metal act TERRORAMA has always been considered as some sort of "kult-ish" act, often being said to belong to either Thrash or Death or Black Metal genres musically, actually proving to be a pretty hard band to put under a certain musical category. TERRORAMA have existed well over 10 years – and during the band’s whole existence they have released 2 full-length studio albums ("Horrid Efface" in 2004 and "Omnipotence" in 2008, both via Nuclear War Now! Productions), and also a few demos and one split album together with English Thrash Metal act ADORIOR. TERRORAMA’s 3rd full-length album on the Swedish To The Death Records, carrying the title "Genocide", features 8 anthems about cruel genocides of nations from the band, and nearly 30-minutes of music. As the title of the album already suggests, "Genocide" is a concept album, dealing with some historic events of the darker side of human nature; about some of the most infamous and tyrannic leaders of mankind from Stalin to Hitler to Idi Amin and so on. So, the concept of the "Genocide" album is based around some most known mass killings of people that certainly aren’t something you could consider reading for your little kids as some late night stories (unless you want to mess their minds totally and make them going insane little by little). Musically, to me anyway, TERRORAMA have this tendency to remind me of the demo days of SADUS, added with some primitiveness and viciousness of Brazilian extreme Metal legends VULCANO and MX. In other words, they do sound fast, aggressive, rebellious, raw yet very uncompromising on "Genocide" – just like they have always done since the beginning of their career. TERRORAMA don’t make any apologies for anyone on "Genocide" either musically or lyrically. The band reveals its whole capacity to be one of the most frantic, energetic and interesting extreme Metal combos in the current Metal scene, simply ruling by everything what they represent. Disliking "Genocide" is a way more impossible task than disliking a plate of delicious meatballs and smashed potatoes, or driving with your fancy and powerful HD on the Route 66. Hence "Genocode" deserves a few fair pairs of "horns up" marks from each of us, I think. So, in the end of the day it’s relatively easy to say these Swedes do fuckin’ rule, no doubts! Band: terrorama.bandcamp.com, label: www.tothedeath.se