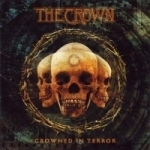 Extreme aggressions!!!! It seems that I should’ve cared for THE CROWN’s evolution a bit more as their newest offering “Crowned In Terror” is a fuckin’ killer of an album! If you ever had any doubts whether former AT THE GATES frontman Tompa would manage to replace old THE CROWN singer Johan Lindstrand or not, this album will blow all of your worries away within seconds! Pure hateful thrashin’ Death Metal with 200% of adrenalin and a power that could easily do a lot of damage to your speakers if you aren’t careful enough during your listening sessions! To me this straight into your face assault is another proof of the fact that Mr.Lindberg is always far better whenever the songwriting is simple and full speed ahead instead of the earlier more complex AT THE GATES material. “Crowned In Terror” is of a similar (if not superior!) quality as “Slaughter Of The Soul”, full of many soon-to-become new THE CROWN classics and by far, the band’s best offering yet! Forget about pussies like THE HAUNTED – this is a real Thrash inferno! Nuff said – on April 8 (the official release date), you better go out and get it while its still hot! Incredible!!!