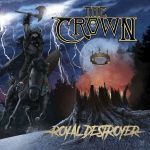 I am pretty sure, there is no need to introduce THE CROWN here to anybody. The Swedish horde is active since 1990 and “Royal Destroyer” is already their eleventh opus and marks their 30th anniversary. So what is better then getting ‘Baptized In Violence’ ? The track starts straight into the face. Fast, brutal and precise as always. Death / Thrash at its finest. Fast drumming, brutal vocals with the well-known choruses and the track is already finished before you realize in what hell you got into. ‘ Let The Hammering Begin!’ continues even faster. The drumming is brutal and hammering while the guitars are thick, but this time a really melodic lead guitar, enriched by some keyboards, appears. This track has all trademarks the fans of THE CROWN want and expect and it underlines again, why THE CROWN currently is the benchmark for all bands playing any kind of Death / Thrash. Since the last album they finally get the deserved credits for their musical legacy, but instead of calming down, they managed to even optimize their style and this track is simply amazing. ‘Motordeath’ offers some more melodic tunes with a Speed Metal touch and varies the whole picture, but incorporates some fantastic melodies again before ‘Ultra Faust’ starts slowly, but with fantastic drum work, before they speed up to kick some serious ass again. ‘Scandinavian Satan’ is another wrecking ball worth to mention, as it comes up damn brutal and pretty simple before some really outstanding guitars really show where the frog has its curls, as we Germans love to say. And the laughter at the end is damn cool. ‘Devoid Of Light’ is more classic Death Metal influenced and very groovy. ‘Beyond The Frail’ is my favourite tune, as it is very melodic, without sounding wimpy and the drumming and guitars are fantastic on this one again and the melody is nothing else but outstanding. What a monster track. I thought THE CROWN had reached their peak with “Cobra Speed Venom” already, but “Royal Destroyer” is minimum on the same level. Definitely already in my top ten for this strange and challening year. Don’t waste time and order the album from the dealer you trust. www.facebook.com/thecrownofficial, www.metalblade.com