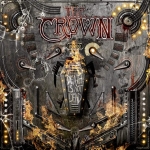 THE CROWN
Death Is Not Dead
(Century Media Records)
50:27min

25 years of THE CROWN (OF THORNS). The band is back to celebrate their 25th anniversary with three of four original members. I remember very well spinning their debut output “The Burning” back in 1995 a dozen times and followed the band more or less since than. Their last output “Doomsday King” was only average to me but their new output “Death Is Not Dead” shows the band in a far better shape. Maybe the return of original vocalist Johan Lindstrand brought some fresh power into the band as his voice fits best to the band’s sound in my opinion. The guitar work of Marko Tervonen, who also was in charge of the drums for this recording and the fine leads of new lead gutarist Robin Sörqvist work out very well in combination. The eleven songs are mostly uptempo, with fine breaks and some nice twin-guitars, which made this genre very popular back in the middle of the 90s. The single output ‘Headhunter’ is a cool track, showing their fine abilities to mix melodic Death Metal with the rough and dirty power of Thrash Metal. ‘Iblis Bane’ is my favourite track of the album, coming up with a memorable nice lead melody honouring their old sound and quality. ‘Speed Kills (Full Moon Ahead)’ also comes up with some fine melodies, but a lot of breaks seem to destroy the harmony a bit. But the album and its songs grow from track to track. Songs like ‘Herd Of Swine’ and ‘Horrid Ways’ seem to say “Fuck You!, we are back!” The production fits perfect to their sound as it sounds clear and natural and not polished at all. ‘Ride To Ruin’ is a dirty Death’n’Roll hymn and a really fine track. All in all, “Death Is Not Dead” is a solid album with good material and far better than THE HAUNTED or similar bands in this genre but still a bit behind their own classics. Anyway worth buying for every fan of the band. Just skip the PARADISE LOST cover tune, as it does not fit in the middle of the album at all. Check them out via: www.facebook.com/thecrownofficial or via www.centurymedia.com