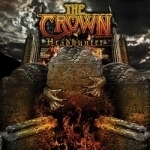 At the turn of the millennium, THE CROWN were one of the hopefuls of the extreme Metal scene. The band, formerly known as CROWN OF THORNS, had already released the album “Hell Is Here” under its new moniker (as well as two under its old name) and smashed me with their year 2000 release. “Deathrace King” was nothing less than a complete killer, a hyperactive bastard of Thrash and Death Metal, always a little bit over the edge. Its follow-ups “Crowned In Terror” (the only album with Tompa on vocals) and “Possessed 13” were fine as well, but after a redundant re-release of “Crowned In Terror”, now with the vocals of original singer Johan Lindstrand, THE CROWN broke up in 2004. Their return six years later with “Doomsday King”, featuring Jonas Stålhammar on vocals, was meant to be triumphant but only turned out to be competent. Or rather boring and quite redundant, to be honest. With another return of original singer Lindstrand, THE CROWN are heralding new deeds for January next year with the new album “Death Is Not Dead”. As an appetizer, we have this 7” with the album song ‘Headhunter’ as the a-side. And this one shows the band in the best form since they returned. ‘Headhunter’ is a little modernized in riffing, yet it features some typical THE CROWN harmonies in the middle part. But still the band is miles away from the quality and freshness of “Possessed 13”, not to mention the overwhelming power of “Deathrace King”. If ‘Headhunter’ is representative for the whole album, I should better not have too high expectations… On the flipside, we find an exclusive track. ‘Unfit Earth’ is a well executed NAPALM DEATH cover, from their album “Harmony Corruption”. It speaks volumes that THE CROWN chose a song from the most controversial and, in my humble opinion, worst album of the masters of Grind… More information at: www.thecrownofficial.com, www.facebook.com/thecrownofficial, www.centurymedia.com