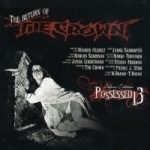 Before I start telling you my opinion on THE CROWN’s newest effort I’d like to make a statement concerning Metal Blade’s/the band’s new idea of copy protection that made reviewing this CD definitely no fun. To prevent members of press and media from making new CD’s downloadable in filesharing programs, each song on “Possessed 13” was fucked up by beeps that emerge from your speaker every 20-30 seconds. Just imagine what effect that has on your listening pleasure! You feel there’s a cool riff coming up and you start to nod your head or move your feet and then: BLEEP! The music continues afterwards until the next beep comes up. Since most people expect me to utter an honest opinion about a new record, I have to say that I can not give you one, when I’m not allowed to have fun while listening to an album. I do not want to get mad at the label or the musicians of THE CROWN, because I can partly understand their arguments in favor of this method of copy protection, but I think there are better ways of keeping people from copying CD’s. Metal Blade’s idea is nothing but fucking annoying!!! Alright, I think that’s enough and I will now give you at least a short comment on “Possessed 13”, which I listened to only one time, because of the aforementioned noises: The Swedish band has released a well produced, not too polished sounding contemporary Death/Thrash CD with a couple of Hard Rock elements primarily manifesting in Marcus Sunesson’s leads (e.g. ‘Kill ‘Em All’). Except one or two weaker tracks, there are just good songs on “Possessed 13”, of which ‘Zombified’ and ‘Are You Morbid?’ are my personal highlights. Nice CD for everyone who dislikes THE HAUNTED because of their too clean and too modern sound and digs driving, dirty, thrashing Metal. For additional infos concerning the special DCD version of this CD and MP3 visit www.metalblade.de.