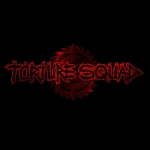 This Brazilian Death / Thrash band has been going on since 1990 and so far they have released no less than eight full length albums and many EPs and live albums. They even won the International Wacken Open Air “Metal Battle” in 2007. So, we are also talking of a very good live band. This boxset compilation of their first four albums and EPs, released by Russian label GS Productions, is a massive way to discover this band. Each CD compiles one full length and one EP in a chronological order. This is something I have seen for bigger bands but I guess that the credentials of these Death / Thrashers and also being around almost 30 years is a good reason for this anthology. The style of the band since the demo days and the first albums is firmly rooted in a very good Death / Thrash Metal which can be related to older SEPULTURA, MALEVOLENT CREATION and CANCER to make a reference. Their thrashy side is there with good old KREATOR, SLAYER and a few METALLICA touches here and there and even some good old Grind in the TERRORIZER style. All of the recordings have a quite good sound and production, although the very first ones are a bit rawer. But that also adds a bit to their sound, specially their debut album “Shivering” sounds so Cogumelo styled that it has a charm of its own. Oh and also the vocals are more evil sounding in the first recordings and kept turning more to the brutal side as time passed by. Once you got through the almost four hours of material included here, I will say that their second album is my favorite one. It still retains the rawness, aggression and definitive Brazilian Metal style of their first album, with better productions values. The band got more mature with each recording, having each time better production values. In a way they do remind me a bit of the evolution SEPULTURA had in their first four albums, but in a better way as the band has kept their integrity intact and the albums released after these ones are in the same style. One thing I just noticed is that the band is going on without any of its original members (much like SEPULTURA also!) and their last material features the growls of a young lady as a new vocalist. Although the band is not doing anything we have not heard before, it is well done and a few killer riffs are always there waiting for the unsuspecting victim to attack. www.facebook.com/torturesquad, www.gsp-music.com