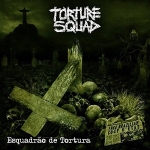 Brazilian outfit TORTURE SQUAD has been releasing albums constantly since their 1998 debut "Shivering". Their brand of Thrash Metal came right at the time when the genre had its "second coming", at the beginning of the 21st Century. While the band has been in constant development, the production throughout their career has suffered ups and (generally more) downs. Luckily, their latest album, "Esquadrão De Tortura", has a great production and it fits their style perfectly. Raw and compressed guitar tone from André, punchy drums from Almícar and a mid-range bass tone from Castor, who also handles the vocals. The individual performances are great and, as a whole, this album is one of the best Thrash Metal releases I’ve heard in the last 2 or 3 years. The songs this time have character. The aggression displayed here reminded me of early THE HAUNTED mixed with the Thrash elements of country mates KRISIUN and some old school SEPULTURA touches here and there. You can’t deny the influences, but these guys came up with one hell of an album. As a side note, this is a concept album. It is based in the period in which Brazil was under an authoritarian military dictatorship (from 1964 to 1985). And no, this is not a pseudo retro Thrash band trying to fit in. TORTURE SQUAD has developed their own style and they are exploiting it with great arrangements, riffs a plenty and a great vocal performance that has some Mille / Araya subtleties. A total headbanging experience from start to finish. This time there is no weak production, no forgettable moments, no nonsense. TORTURE SQUAD has overcome any of their past flaws. This is a Thrash Metal album that could’ve been released in 1989 or 1995 or any other year. Because great, honest music, is timeless. 11 songs plus a bonus track (the excellent ‘A Soul In Hell’) make up "Esquadrão De Tortura". And all in all, it measures up to any past or present Brazilian releases. Get a hold of it as soon as possible, because it is limited to a digipak run of 100 hand numbered copies. Absolutely recommended for any self declared (real) Thrash Metal fan. Contact the band here: www.facebook.com/torturesquad. And their label here: www.gsp-music.com, http://gsproduction.bandcamp.com