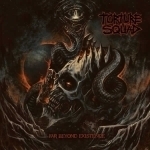 I had no idea that these Brazilian Death / Thrashers were still at it; my only exposure to them until this album was the great “Asylum Of Shadows” that was released in 1999 and a few tracks off the 2001 and 2003 releases. There’s been some drastic line-up changes since this aforementioned album, the long-time vocalist leaving, and several guitarists coming and going. When a band replaces vocalists and guitarists it can change the sound drastically, especially if the guitarist was a major songwriter. If anything, I was really curious to hear what they’re offering now. To be honest with you, I wasn’t really all that impressed with this album to begin with. The first two songs bludgeoned me with antipathy and apathy. It’s not until the third track where this album comes to life on its own merits. ‘Blood Sacrifice’ starts with a very atmospheric clean vocal passage with minimal instrumental accompaniment, if TRIPTYKON’S interludes went by way of the Middle East or Orient, and kicks in with some catchy riffing that doesn’t relent. The middle 4 songs (‘Hate’, ‘Hero For The Ages’, ‘Far Beyond Existence’ and ‘Cursed By Disease’) also feature some parts that are enjoyable. There are a few guest spots on this record, most notably Dave Ingram of BENEDICTION on vocals on ‘Hate’. There’s some common ground with their original style, but they’ve moved towards a modern Death / Thrash sound, and I can’t blame them as not everyone can be MOTÖRHEAD and keep playing the same thing forever. Although everyone does a great job on this, the highlight for me is the drumming. There’s plenty of frenetic blasting and beats that would make Lombardo, Sandoval and Cavalera proud. That said, the older tunes had a dark atmosphere to them, something sinister rising to the surface. It was almost like the band were fighting with their instruments, barely able to control the chaos they were unleashing, and always a step from falling apart. This is a magic that “Far Beyond Existence” doesn’t match and can’t match. www.facebook.com/torturesquad, www.gsp-music.com