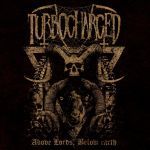 TURBOCHARGED
Above Lords, Below Earth
(Go Fuck Yourself Productions)
35:23min

TURBOCHARGED is a Swedish band, that is active since 2000. Although they will soon be 20 years old, they have been releasing new material in regularity since 2010 like an efficient turbine. Initially, it took quite a while for the Swedes to have a stable line-up, but since then the trio has been uncompromisingly pulling its D-Beat, Crust and Death efficiently and managed to release a handful of demos, EPs, splits and full lengths bearing explosive titles like “AntiXtian”, “Area 666”,“Militant” and “Apocalyptic”; which can easily give an idea about their notorious, arrogant and filthy yet well-built discography. Continuing the ceaseless productivity, they returned with their new full-length, “Above Lords, Below Earth”, which is now released worldwide via GFY (Go Fuck Yourself) Productions. "Above Lords, Below Earth" is already their fifth studio album and here TURBOCHARGED evolves by putting aside the Black Metal influences of the previous album to turn towards Death / Thrash Metal, blended with Punk and Rock’n’Roll, which certainly bows to MOTÖRHEAD, VENOM, BULLDOZER, ENTOMBED, DISCHARGE and DISMEMBER; especially ENTOMBED which must have always remained among the core influences on the content of the compositions of the trio. Twelve songs, 35 minutes of filthy sonic blasphemies stomped with full energy enough to crack bones and skulls; TURBOCHARGED delivered again here and live up to their name. From the very beginning, the tempo sores as mad force meets punkish undertones with the rotten and grim roots of Swedish Death Metal. And each title – like a short burst , never exceeds four minutes – can be considered an invitation to maddening head banging spearheaded by legendary Ronnie "Ripper" Olson (ex – GEHENNAH and ex – VOMITORY) by his vocal deliveries full of insanities and malice. Over the course, ‘Black Tornado’, ‘Thirteen Burials’, will surge mid tempo destruction while ‘Harbingers At Dawn’, ‘Obscurant’, ‘Above Lords, Below Earth’, ‘The Crawling Path Of Worms’ and ‘Dried Blood (The Heretic Confession)’ will rage devastation with its aggressive speed. Considering the savage Punk mood flowing in the tracks, like ‘Doomsday Hammer’ and ‘Unholy Deathpunk’, by its lowly tuned guitar and droning bass; the atrocious deliverance on ‘Total Doom Arise’,’ Low-tech Blasphemy ‘ and ‘The Burning Of A Redeemer‘ will certainly manifest the overall variation and depth of song crafting in the whole record. "Above Lords, Below Earth" put forth wrath with heaviness from start to finish and in doing so; they added as much Death’n’Roll to their Death Metal like Lemmy used to pour coke into his bourbon whiskey! The result is as infuriating and blazing as it could be, as like TURBOCHARGED became a mature distiller brewing expertly by following golden traditions and tactics. With their inspired blend of Crust and D-Beat, TURBOCHARGED’s fifth deliverance is an adrenaline full, fierce and unrefined source of energy and inherent speed. They certainly did not reinvent anything here; but it’s crafted with attitude and from heart and yet again the Swedes unquestionably managed to make another meaningful record, which should be explored many times by all aware fans and fanatics. Explore more about the band at www.facebook.com/turbochargedswe or follow their label page www.gfyp.de.