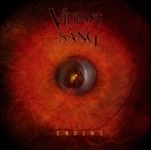 The band was formed in 2002 as an extreme music project without any special aim to be labelled, but not trying to innovate either. Influences are taken from Black, Death and Heavy Metal. Their lyrics are sung in their native Catalonian language and deal with different poems of a Catalonian poet. You can expect a modern sounding Death Metal that has some very good moments, but still lacks of a mighty atmosphere. Most of the time the songs are hectically played, some structure is to be found, but no real impact on the listener is guaranteed. The best song on this (second) album of VIDRES A LA SANG (means crystals in the blood, by the way) is the last one that can show a bit of an atmosphere. In the end, the whole record sounds too modern in my old school contaminated ears. www.xtreemmusic.com