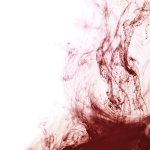 VIDRES A LA SANG are based in the Spanish region of Catalonia and they use the Catalan language. Although this language belongs to the so-called Latinian / Romance languages like Spanish, French, Italian etc. it sounds pretty arcane and mysterious to my ears. Not the worst suppositions for a Black Metal album. By the way, the third full-length and the first after a hiatus of eight years. "Set De Sang" starts in a wicked way of mixing Black and Death Metal, but already at the end of the opener clean vocals are used. A mere token of what to expect from the rest of the playing time. The band is oscillating between the two poles fast, aggressive and calmed down, epic mid-tempo parts. Like a mixture of BELPHEGOR and BORKNAGAR. And, not to forget, EMPEROR during their "Anthems To The Welkin At Dusk" era. Of course these are just my references, the mentioned EMPEROR album was released 21 years ago. But back to VIDRES A LA SANG and the seven tracks of "Set De Sang" (stands for "Set Of Blood", translated with Google, but the deeper meaning remains concealed). What I liked about this output is the general feeling of energy and dynamic which is presented to the listener. At (almost) every moment something is happening, a guitar solo, a marching mid-tempo attack, hymnal clean vocals giving, soundtrack like soundscapes, moments of sadness and anger and so on. Songwriting over the top, so to say, balancing on the thin line of being not to repetitive and not overcharging the listener by using too much of the above mentioned. Even so I would not say the Metal scene has been waiting for an output like this and for me the clean vocals are too often used, but I have to acknowledge the great musicianship being presented here. All Black Metal enthusiasts with a passion for stuff like early BORKNAGAR and later EMPEROR should visit www.facebook.com/vidresalasang, www.facebook.com/hecatombe-records-171144762973227