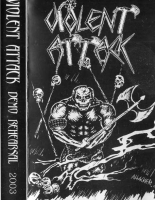 VIOLENT ATTACK is a band from Paraguay, formed in 2001, that plays Thrash Metal. They released four demos and we have the 2003 one. The tape contains four songs which are well played. I would call it Thrash Metal. The band not only plays full speed but also put some slower headbanging parts to their songs so the stuff is more variable and doesn’t get too monotonous. The guitarists fill the songs with some nice licks during the good riffs. Not new and spectacular but pleasing. The opening of one of the tracks reminds a little bit of SODOM’s ‘Ausgebombt’ because of the starting bass riff. The vocalist with the funny name "The Attacker" has a thrashy voice like old Angelripper, filled with some high screams that are not so perfect. The production is like a rehearsal demo is. Not the best, but ok so that you can listen to the songs and hear all instruments. It’s the first tape from Paraguay that I heard so I couldn’t say if it’s good or bad for this area.