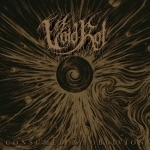 It’s quite a feat when music takes its time – when it doesn’t have that sense of urgency but instead bides its time – yet it still manages to keep you on your toes. "Consumed By Oblivion" (fitting title) lasts for only a quarter of an hour but what ride! Riffs mostly plod along – it’s Death / Doom, after all. But they sound monstrous, be it resonating chords, vibrating with fowl frequencies, or tremolo picked notes, done so mostly as the music speeds up. It all ties in well with growls, echoing as if they were recorded in a cave, all the while leaving enough room for drums – especially when blast beats come into the picture and guitars take the back seat with not following suit, meaning they stay in "Doom" mode when the drums have already gone full into "Death" mode. Brutal does not equal fast. And it’s interesting how slower music can feel crushing if all the necessary elements are present. Production included. VOID ROT opted for a clean sound, locked down on heaviness. Meaning guitars sound like they weigh a ton and drums just fill the room. Everything is audible with bass staying more in the background. The three songs included are varied enough that warrant plenty of listens and props to stripped down lyrics – less is sometimes more! No beating around the proverbial bush in this case, just image after image as if you’re reading a script for, well, something that is consumed by oblivion. More here: www.facebook.com/voidrot, www.everlastingspew.com.