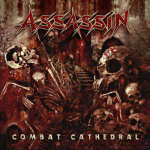 One of my all time favorite debut releases is without a doubt “The Upcoming Terror” by these German Thrashers ASSASSIN. For me it has qualities comparable to what KREATOR, SODOM and DESTRUCTION did. Very well played, fast Speed / Thrash Metal with raw deathly vocals. And one fantastic cover art. So, when their second album was released, I was a bit let down as they took their Thrash more in the “fun” direction, still enjoyable, but I always felt something was missing. So, the fact they decided to quit afterwards was not a strange thing to me. Fast forward a few years later, and with the “revival” thing going on, ASSASSIN is up again. Rob Gonnella was in, so at least one of the trademarks of the band was there. “The Club” was the comeback album, and besides an incredible crap cover art (a picture of the band) we were also faced with some very mediocre Speed / Thrash way below what they did on their early albums. But not only me, many fans were disappointed by this release. So, next strike “Breaking The Silence” with a great cover art, was a let’s say return to form. Yet, for some good riffs here and there, there were some awful Hardcore / PANTERA grooves that sound bad. Well, this new album, where they go for another good cover, yet changing their logo (what was wrong with the one used in the first album?) they kept the same path. Gone is Gonella on vocals, but the new guy does a similar job. They still have some very good Thrash riffs, as good as on their debut album, but as soon as they go into that groove crap, it all seems lost. If for once they get more serious, get rid of those grooves and keep doing straight ahead Speed / Thrash the way they surely can, I am sure this will be a lot more enjoyable. Believe me, they still have that fire in there (well, in my humble opinion this is definitely the best ASSASSIN release in quite some years! I never really liked any of their comeback albums too much and was even more worried when original vocalist Robert Gonella got replaced, but "Combat Cathedral" is definitely a very strong album! It’s got great sounding, very aggressive vocals (in fact, I like them even more than anything that Gonnella delivered the last couple of years), tons of killer riffs and a solid production! Yes, it also has some modern groove overtones here and there, but I don’t really mind and in its entirety it is still a very convincing record that’s definitely more in league with their old classics and easily makes you forget "The Club" or "Breaking The Silence" – Frank). More info at www.assassin-online.de, www.facebook.com/assassinofficial, www.spv.de