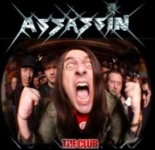 Seventeen long years after the release of “Interstellar Experience” Düsseldorf’s Thrashers ASSASSIN finally return to the scene with a brand new album. Except for bassplayer Markus “Lulle” Ludwig, who got replaced by a guy named Ufo Walter, the current line-up only consists of members that already used to play on the band’s two full length albums, namely Robert Gonnella (vocals), Frank “Scholli” Scholz (guitar), Frank Nellen (drums) and Michael Hoffmann (guitar). Unlike the majority of Metal fans, I personally always preferred “Interstellar Experience” over “The Upcoming Terror” for its razorsharp, uncompromising riffing, sheer intensity and power. So, I was hoping that the band would somehow continue on from there. But just like all the other reunited 80s (Thrash) bands, also ASSASSIN sadly failed to live up to their overmighty musical legacy… I hate to say this, but none of the eleven new ASSASSIN tunes on “The Club” comes any close to their classic material. I suppose the Thrash Metal lifestyle that many bands of the 80s used to live and breath (to the max) simply got lost somewhere on the way… And hey, it’s pretty natural! You grow older, maybe start up a family life and as a result you calm down sooner or later, listen to different types of music and of course also improve as a musician… All that is perfectly reflected in material that gets written after so many years. Don’t get me wrong. It’s not that ASSASSIN anno 2005 have totally changed, jumped on any bandwaggon or can’t be associated with Thrash Metal anymore… it’s actually still very raw and aggressive stuff. But to me it often sounds too average (either the music, the vocals or some annoying melodylines), overall too uninspired or simply lacks the old straight ahead fuck off attitude. It may sound a little stupid, but to me the guys obviously tried too much to mix up a whole bunch of new ideas as opposed to stick to the straight from the heart outbursts of their early days. I mean, on one hand they incorporate a short, typical SLAYER riff (‘South Of Heaven’) in the album’s title track, then there’s the opening of the song ‘The Price Of Power’, which reminds me on ‘Lullaby’ by THE CURE and all of a sudden there’s even a THIN LIZZY cover (‘Thunder And Lightning’), which seems a bit out of place on the album anyway (Paul Speckmann did the same mistake on an older MASTER record). I was ready to give up on the record already, but after I had listened to “The Club” over and over again I tracked down at least one song, which has a little bit of the old magic in it and that’s ‘Real Friends’. It’s a fast and pretty straight ASSASSIN crusher. Not exactly of the same class as their old stuff, but still pretty enjoyable. All in all not enough to convince a narrow minded Thrash Metal fan though and definitely not enough to compete with (for example) fellow Thrashers KREATOR who still deliver top notch quality, even today! Contact: www.assassin-online.de