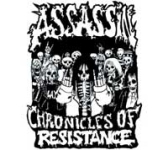 With the advent of a new, and blessedly brief, Thrash revival, a number of old hats flew out of the dusty closet where they once lay forgotten. Some reunions were like old heroes, come home from a long absence. Others perplexed, leaving us to scratch our heads with wonder. “Why did they come back?” I confess I’m tempted to ask the same of Germany’s ASSASSIN, who, it should be noted, made their return to the scene in 2005 with “The Club”, well before the global horde of posturing imitators reared their mannequin heads. In 2011, the band returned yet again with “Breaking The Silence”, an album which appears to have fared far better than the ill-fated “The Club”. However, neither that record, nor the one preceding it, can hope to match the first two records, thoughtfully collected by Steamhammer on a double-disc containing both albums, plus a few bonus tracks from a gig in 2010. These early ASSASSIN albums, “The Upcoming Terror” (1986), and “Interstellar Experience” (1988), stand taller, prouder, and just plain nastier than their aged, post-millenium successors. “The Upcoming Terror”, for instance, typifies the mid-80s German sound: chaotic, fast, blasting, drumming; wild shrieks for vocals, and primitive, ballsy, riffs. KREATOR and SODOM held dominion in 1986, so small wonder that their countrymen should follow suit. Fast forward to “Interstellar Experience” in 1988, and the story remains relatively unchanged. “Interstellar Experience” is cleaner sounding than “The Upcoming Terror”, but the speed and aggression are still there, pulling the listener from star to star, planet to planet, on a journey through thrashing space. One song stands out from the others. Instrumentally, ‘Junkfood’ is just that: junk. But the obvious humor makes it all okay. Why not have a chuckle with your Thrash once in a while? Put short, unless ASSASSIN equals or surpasses either of their first two records, “Chronicles Of Resistance” will serve our needs. www.assassin-online.de, www.myspace.com/assassinthrashmetal