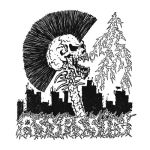 Germany’s ASSASSIN had a very inconsistent career during the 80s. Formed back in 1983, they released a classic Teutonic sounding Thrash full-length in 1987 that competes in terms of speed and brutality with big names as DESTRUCTION, KREATOR and SODOM. I’m talking about the classic “The Upcoming Terror.” One year later, they released their second album under the title “Interstellar Experience.” The stuff was oriented to a different kind of Thrash Metal, closer to TANKARD, D.R.I. or NUCLEAR ASSAULT than the aforementioned Teutonic acts. They disbanded in 1989. Anyway, High Roller Records has released a compilatory work that features the two very first demos of this classic Thrash Metal institution. We are talking about “Holy Terror” from 1985 and “The Saga Of Nemesis” from 1986. The music on “Holy Terror” can be described as raw, fast and brutal. As a demo tape, the production is far from perfect, but you can hear everything very well. Tracks like ‘Fight (To Stop The Tyranny)’ and ‘Holy Terror’ are fucking brutal. Both appeared later on their debut album plus ‘Bullet,’ ‘Assassin’ and ‘Speed Of Light.’ “The Saga Of Nemesis” is better than their first demo, in my humble opinion (here goes another Teutonic demo recommendation from 1986: PROTECTOR’s “Protector Of Death”). ASSASSIN sounds very tight and professional, plus a better production; this is a winner demo. Here you can hear classics as ‘Forbidden Reality,’ ‘Holy Terror,’ ‘Nemesis’ and ‘Speed Of Light.’ I guess they were working on their debut album at the time. Unfortunately, I haven’t heard their later stuff, but if you are not familiar with ASSASSIN, this is an excellent way to start discovering a classic act. And if you’re familiar with NECRONOMICON, DEATHROW, VIOLENT FORCE, DARKNESS and so on, this new / old release must be in your collection. You can follow them at www.facebook.com/assassinofficial. To get yourself a copy, visit www.hrrecords.de before it is too late.