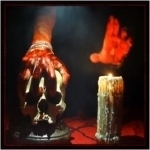 Spain’s BALMOG have been creating horrifying Black Metal since 2003, and this is their second album. The cover art sets the tone for the album quite good. The Black Metal style of the band is actually more akin to Finnish Black Betal bands, similar to BEHEXEN, SARGEIST or HORNA just to name a reference, although I can listen to some more complex “orthodox” Black Metal essence like early WATAIN and some later DEATHSPELL OMEGA and with slight touches of the more macabre form of Death Metal. The production is great as everything can be heard, the band is in no need to create cacophonous riffs just for the sake of it, and it all sounds quite well thought and crafted with care. The execution is also very good and has that melodic approach mixed with a suffocating atmosphere, where the sudden fast riffs grabs the listener by the throat to then dispose of the lifeless corpse. If you are a fan of the style, more than once you will need to check out the cover art to realize what band this is, as more than once I can almost recall hearing that certain riff before, although this is the first time facing this beast named BALMOG. And although we can safely say that this has been already done many times, the quality of the material contained within is of such caliber that it just does not matter that much. Special mention must be done to the killer vocal performance here, truly a great growler for the style and with a clear yet cavernous voice. Overall the music has that ritualistic sound that evokes images of darkness, bones and the unknown. At times I feel that the guitar player wanted to show his skills, but for some reason he keeps it safe. And I am more than sure that some melodies and solos could be added here and there without taking away the obscure and terrifying aura the band wants to create. Towards the end of the album things get a bit tedious, and the last instrumental song is too long to end the album. Still, this is a very good release in the genre and a band to keep an eye on. www.facebook.com/pages/balmogby-hekate/365630056846060, www.blackseedprod.com