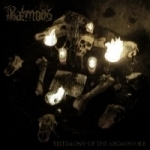 Spain’s BALMOG were formed back in 2003 and almost ten years later they are releasing their first full length. Their style contained here is a dark and obscure form of Black Metal in which one can sense a lot of evil Death Metal influences, thus maybe naming MAYHEM from their only album (yeah, that MAYHEM not the post “DMDS” tribute thing going on with the same name) can serve as a reference. I also like the quite dismal but powerful guitar tone, resembling to mid-era GEHENNA from Norway. Vocals are also more into the evil Death / Black Metal territory. So, fans of dark Black Metal with strong evil Death Metal influences, will definitely find this a quite good acquisition, in a band that plays in a very competent form, with a very powerful sound and that shows Black Metal is more than thin guitar sound, rehearsal-like production and girly vocals. Killer, powerful Black Metal like it was meant to be played by this trio of Cervantes’s evil descendants. www.myspace.com/balmog, www.blackseedprod.com