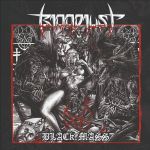 It’s 1986 all over again! Formed in 2012, fierce thrashin’ maniacs BLOODLUST have arrived to unleash their first full-length album right after one self-released tape EP, one tape split and a 4-way split CD. The trio hails from Medellìn, Colombia, but their spirit is firmly rooted in classic teutonic Thrash Metal. You can definitely sense this specific influence on bassist and vocalist John Barrientos Lopez’s shrieks, pretty much in the vein of "Terrible Certainty" era Mille Petrozza. Lopez also adds some exquisitely excruciating Tom Araya-esque screams here and there (check out ‘Incantation Of Sin’), which add an extra 666% to the combo’s evil take on fast paced Metal. BLOODLUST wield their sticks and axes quite good, with guitarist Julián Rengifo’s E flat-tuned guitar ripping across Santiago Lozano’s two beats and Speed Metal, bass drum-filled tempos. No rest for the wicked and basically no midtempos of any kind, except for the song ‘Lucifer (The Bringer Of Night)’. The album’s intro is what I believe to be a sample off Vernon Sewell’s 1969 "Curse Of The Crimson Altar", but I might be wrong on this. Not too much sonic variety here but, on the other hand, some thoughtless, unholy headbanging is guaranteed for all. Fans of Japanese SABBAT, MORBID SAINT, early DARK ANGEL or WHIPLASH should give this record a spin. Check BLOODLUST’s activities on www.facebook.com/bloodlustspeedmetal or write them at bloodlustmedellin@gmail.com. Label contact: www.facebook.com/ibdc666