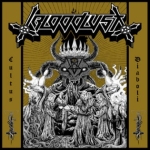 Here we have BLOODLUST, a duo hailing from Perth, Australia with their first full-length entitled “Cultus Diaboli”. Being active since 2011, the band so far has released two demos and a single prior to this year’s output. The whole aesthetics this band parades already reveals that this is pure blackened Thrash Metal, nothing more and nothing less. Upside-down crosses, pentagrams, hooded figures, a virgin sacrifice, the devil himself; BLOODLUST delivers it all. The first track ‘Apocalyptic War Command’ kicks off the album with a double bass drum intro followed by classic tremolo picking guitar action. One immediately grasps that BLOODLUST will not re-invent the wheel with this release but surely know how to construct it on their own. I personally am not a big fan of this kind of music but BLOODLUST still managed to catch my attention with their interesting songwriting. “Cultus Diaboli” consists of a lot of twists and breaks within the typical blast beat attacks as well as almost catchy grooves and melodies. Highlights of the record would be ‘Black Blood Of Satan’, ‘Rex Inferni In Terra’ and ‘Crowned In Black Fire’. Unfortunately the album loses a bit of its energy after this triplet. Especially the to me unnecessary long and dodgy ‘Spell Of The Raven Witch’ (featuring an almost sludgy middle part) is responsible for that turn. The closer ‘Iron Tyrants’ again adds some more energy with lots of double bass drumming, gang-shouts and high speed riffing. Fans of bands like NOCTURNAL, KETZER or early DESTRÖYER 666 definitely should not hesitate and check this record out. Go to www.facebook.com/pages/bloodlust/128010140617407 or www.facebook.com/ibdc.label for more information.