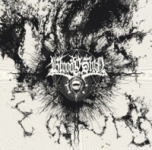 With their third full-length opus “Chaos Echoes”, France’s dark ambient Death Metal artists BLOODY SIGN provide a rich and textured listening experience that challenges the open-mindedness of the Death Metal fan while not completely alienating the purist. Here you’ll find waves of amorphous dissonance, scores of watery diminished fifths, meandering song structures, numerous and varied vocal experiments, sparing use of keyboards and tape effects, dirge-like Doom Metal, and a creeping sense of wonder and mystery throughout. Underneath its curiosities, “Chaos Echoes” possesses a brutal Death Metal backbone that is furiously delivered with power, speed, and accuracy, though it is chiefly the throttling drums that provide the Death Metal feel as the prevailing minor chord riffing seems reminiscent of second-wave Black Metal experimentalists like EMPEROR, SATYRICON, and ENSLAVED (note: you could probably add AUTOPSY, INCANTATION, IMMOLATION, and old MAYHEM, along with LED ZEPPELIN and mid-’70s-era MILES DAVIS as reference points to get a better idea of just what to expect from this record). BLOODY SIGN show that they are an advanced group quite willing to push beyond the typical formulas into unusual realms of discursiveness and indulgence. On the plus side, their attention to dynamics is commendable, as is the suggestion of ebb and flow in their songwriting. Now for the downside – at times they’re dabbling with something like free jazz. You’ll hear them suddenly digress from a pummeling Death Metal section and land on a diminished chord on to which they adorn flourishes of improvisational-style guitar noodlings, and it must be said: a few of these parts sound like you just stepped into the local music emporium after school has let out, ugh! I’m guessing (considering the album title) that these moments serve to further embellish the chaos concept and loosen things up a bit, but personally, I could do without that kind of nonsense. This is an intriguing and recommendable album not in spite of its avantegarde-esque experimental trappings – which are manifold and in many cases quite interesting – but because the unfortunate ones do not intrude too often and its beating heart of brutal darkness holds this listener’s interest and commands his respect. For further information, visit www.myspace.com/bloodysign or www.bloodharvest.se.