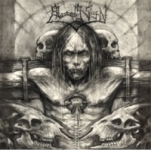 Maybe you saw INCANTATION during their 2004 European tour, then you saw BLOODY SIGN drummer Ilmar who took place behind the INCANTATION drum kit because original INCATATION drummer Kyle couldn’t play that tour. Anyway, after several demo releases here’s finally the debut album by French old school maniacs BLOODY SIGN. On "Vana Vigala Loits" they are presenting a rather cool mixture of blasphemous, old fashioned Death (more) and Black (not that much) Metal. The song basis mainly is Death Metal decorated with many tempo changes, plenty neck breaking guitar riffs, pounding drums and aggressive, growling vocals… now and then BLOODY SIGN added some blackish screaming and some fast Black Metal riffs. For my personal taste those parts are superfluous but as mentioned before the Death Metal part is the dominant one. BLOODY SIGN created some very fine and powerful songs with an unholy atmosphere and therefore I really enjoy "Vana Vigala Loits"… it’s raw, it’s dark… it’s Metal!!! Unfortunately there are only five "real" songs on "Vana Vigala Loits". Track number four, the title track, is nothing but the whaling voices of old women… sounds like that kinda African tribe chanting… it would have been okay for a short intro but 2:41 minutes are definitely too long and definitely too boring… Besides that there is also a good PESTILENCE cover version and the last song is recorded live. So the regular album isn’t longer than 22 minutes which is, in my humble opinion, not that munch for a full-length release, isn’t it? But that are the only negative points here. "Vana Vigala Loits" is a damned cool piece of well played, unholy and absolutely non trendy Metal and it’s highly recommendable to all old school Death Metal heads. Thumbs up… http://bloodysign.metalspirit.net