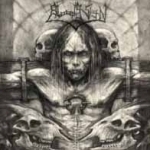 Quite a blast! Recorded in Estonia on their 2003 tour, this album shows a skilled and highly motivated old school band! I never heard the old demos but according to Frank, this one’s an improvement once again. And indeed, "Vana Vigala Loits" is highly enjoyable. Their new singer sounds strong, totally in the old tradition, no ridiculous frognoize on here of course! Actually, the vocals are even the coolest part of this demo (I tend to rather fix on vocalists anyway) and might be the little extra putting BLOODY SIGN above all those hordes of traditional extreme Metal bands. On the other hand, there is a slight difference between BLOODY SIGN and the old classics like PESTILENCE or ASPHYX which can be witnessed on this very CD as BLOODY SIGN cover PESTILENCE’s ‘Parricide’. But I didn’t say these French sickos are the next big thing everybody’s gonna buy and love, those times seem to be over anyway BUT I don’t see a reason why fans of those aforementioned masters of Metal shouldn’t like BLOODY SIGN because they’re simply good. They opened for CRADLE OF FILTH and IMMOLATION in Strasbourg, France, (one track from the show on here) and I can tell you I’d rather have seen BLOODY SIGN instead of AGATHODAIMON who were the opening act in Hamburg, Germany at that tour. And that’s the point: BLOODY SIGN are looking for a record deal right now and if there is any sense left in the underground companies, they’re gonna sign a bloody contract with these guys right away. Until then you can order "Vana…" from the address above or directly at: www.bloodysign.fr.st/. Oh, and meet these crazy guys at the Voices fest!