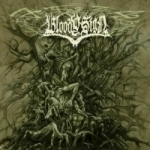 A band that has been featured in Voices many times over and with almost as many line-up changes to boot! Here again are those French Death Metal maniacs called BLOODY SIGN! Heavy, technical, U.S. inspired Death Metal is the forte here – a culmination of many influences can be heard on this nine song record and of those the obvious standouts are the unholy trinity that is MORBID ANGEL, INCANTATION and IMMOLATION. Lyrical matter and song titles are as you would assume, and all do indeed span the real expanse of Hell and then some! Truly strange to hear a band like this (and with such brutally low vocals too!) that call France its home. Almost as unbelievable as when I was first introduced to MASSACRA aeons ago. Just hits you like a brick in the head from out of nowhere! Speaking of that. BLOODY SIGN also cover MASSACRA on this CD with a very cool version of ‘Apocalyptic Warriors’ from 1989’s “Final Holocaust”! Come on you fuckers.You know the words don’t ya?! Scream it!!! “IN A LAND OF DARKNESS. ONLY WAR MAKES THEM LIVE. NO ONE KNOWS WHO THEY ARE. IT’S TOO LATE TO KNOW IT. DEATH WARRIORS WITHOUT FEAR. DESTROYING ALL AROUND. THEY ARE BACK, BACK TO KILL. WITH VIOLENCE AND BLOODSHED!!!” The CD also carries with it a bonus, an accompanying mini video for the opening track ‘Serpent’s Sky Secrets’ recorded live at The Grillen, Friday October 13th, 2006. The wonders of technology never cease! Band contact: BLOODY SIGN c/o Uibo, 47 rue Basse, 68420 Gueberschwihr, France or uibokalevi@hotmail.com. Label: www.ibexmoonrecords.com